This year's FREE outdoor Puzzle Hunt took place Saturday, Sept 21
at the Weirton Event Center (and surrounding area).  Here are the explanations of the puzzles:
In our game, players visit locations marked on the map and decode a puzzle. Each puzzle produces a number. Players know they are to circle that number on their list of possible solutions (on the reverse side of the map).  Most of those are decoys.  The phrases next to each number are useless gibberish until we give the final clue at 3:00. 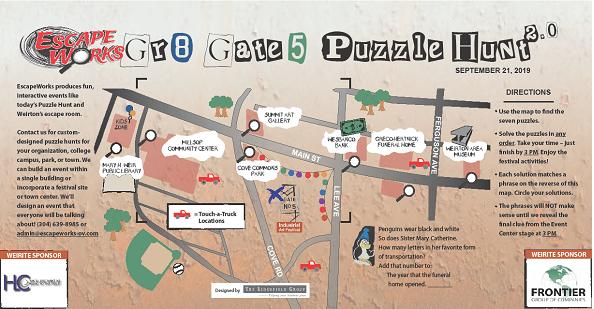 ​LIBRARY PUZZLE:
Players arrived at the Mary H. Weir Library to see that the outdoor gallery had become the lobby of a multi-plex theater. 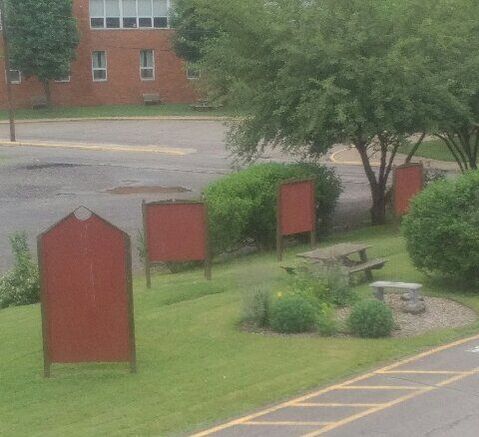 ​The gallery frames were adorned with posters announcing the movies playing in each of the eight imaginary theaters: 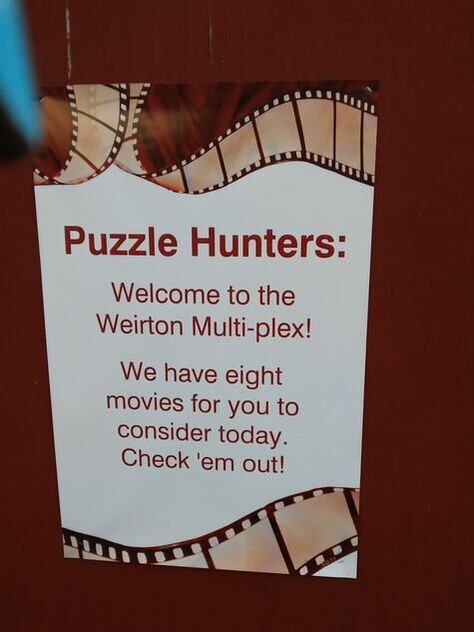 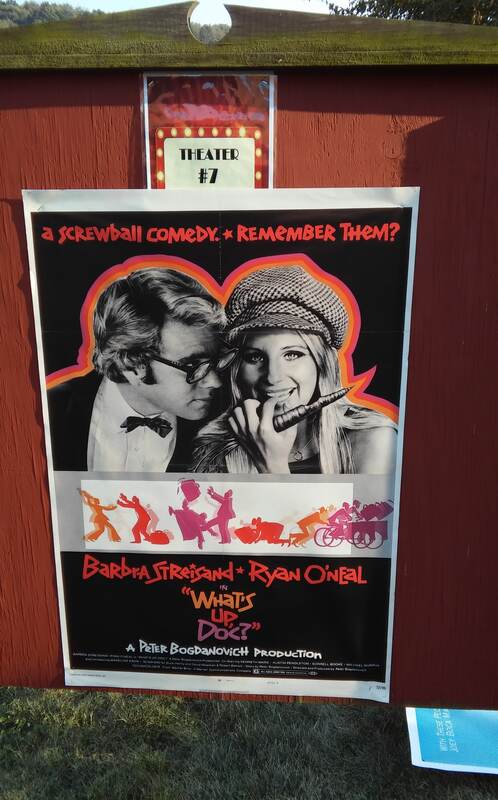 ​Scattered around were five yard signs, each of which contained a portion of a simple equation. For example: 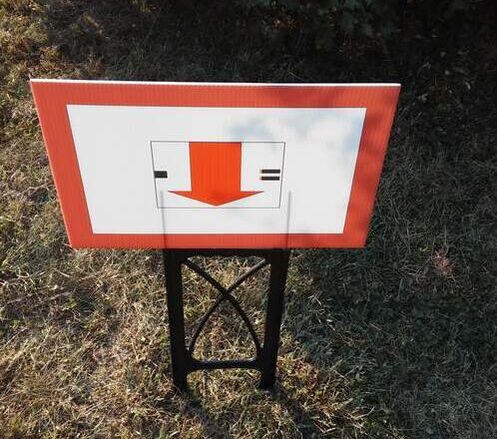 ​By putting the five yard signs in correct order, we see this

Players should interpret this as “Up Doctor plus Up plus Left plus around minus down.”   Astute players noticed that some of the posters were advertising movies with those words in the titles.  Namely:  “The Break Up,” “The Last House on the Left,” “Around the Bend,” “What’s Up, Doc,” and “Fire Down Below.”  By plugging in each movie’s theater number, we get:  7+4+2+1-8=
Answer: 6
​
MEMORIAL WALL PUZZLE:
At the memorial wall in front of the Millsop Community Center, players see three yard signs. The first two comprise a short poem:
As the summer gives way to Fall
Honor our veterans, one and all.
When times were tough they each stood tall
Even with their backs against the wall. 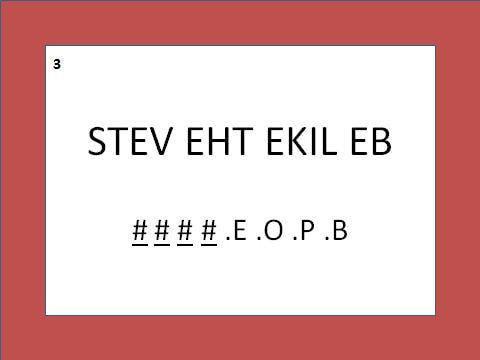 ​Written backwards, that instruction is to “be like the vets.” That is, with their “backs against the wall.” Players who stood with their backs to the wall (and looked into the distance) would see the sign for the B.P.O.E. lodge across the street. 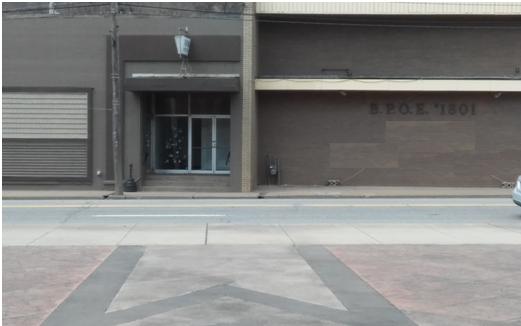 At Cove Commons Park, players encountered a puzzle that ended up being more difficult than we expected. We really thought this one wouldn’t be all that tough.
Players begin by examining a large banner that reads: 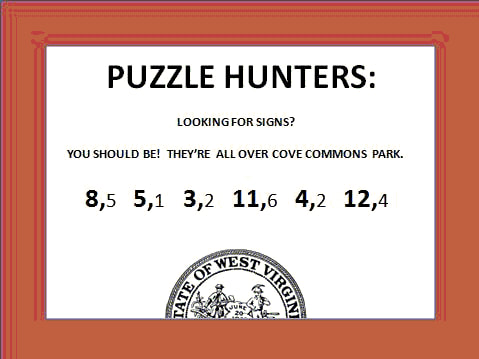 ​On the lower edge we see a portion of the WV state seal.
As promised, there are more signs to discover. A yard sign with the familiar red border reads: 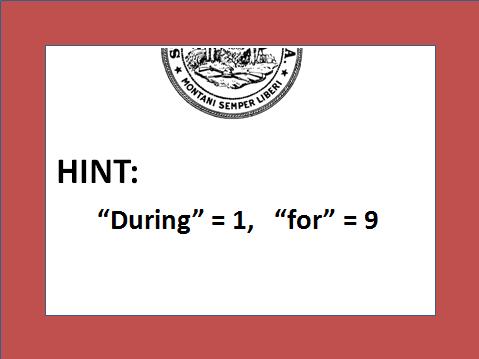 ​Again, a portion of the WV seal.

The WV seal should reassure players that when they happened upon this historical marker, they were in the right place: 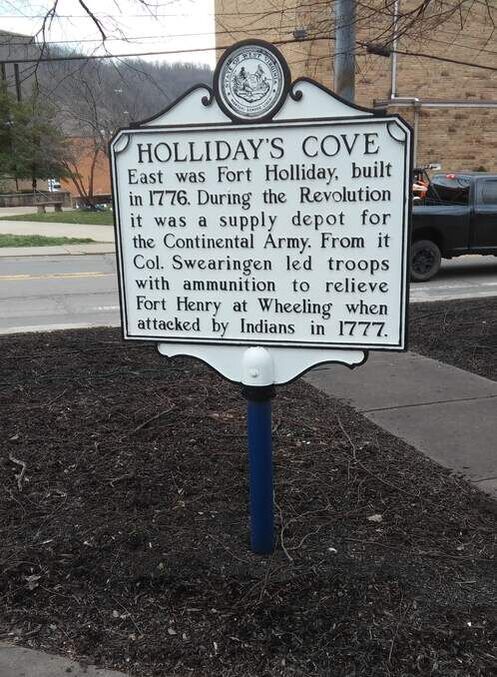 As we know from the yard sign, “During” = 1 and “for” = 9.
​
On the historical marker, the second sentence begins with “During.” That’s word #1.  Word #9 in that sentence is “for.”
So, players can now apply the numbers from the large banner.  For instance, 8,5 refers to the eighth word, fifth letter in that sentence. (That’s why the first number of each pair is larger and bold). Looking at the historical sign, we see the eighth word in our key sentence is “depot.” The fifth letter is T.  Converting each pair of numbers in this fashion reveals: t w e n t y.
Answer: 20

MURAL PUZZLE:
This one was simple observation. On the map itself, we printed this clue:

Penguins wear black and white.
So does Sister Mary Catherine.
How many letters in her favorite form of transportation?
Add that number to:
The year that the nearest funeral home opened. ​


Observant players arriving at the designated location would notice that the penguin on the map also appears on the large mural covering this building’s wall. So now we know the puzzle involves that mural. 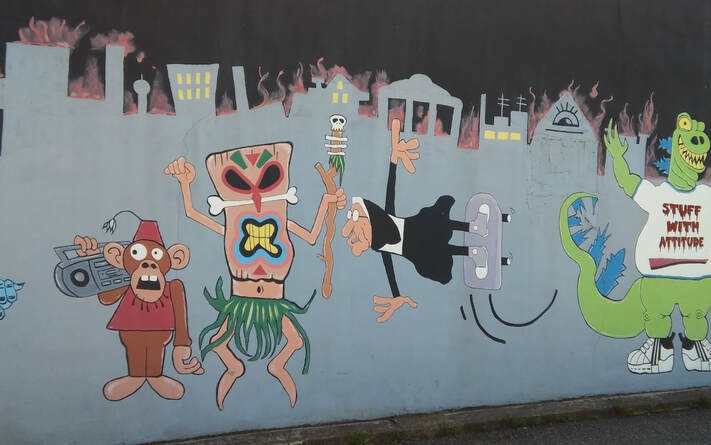 ​Elsewhere on the mural is a nun in a habit (Sister Mary Catherine,” dressed in black and white). She’s on a skateboard. There are ten letters in her favorite form of transformation. The clue says to add that number to the year the funeral home opened. Again, observation is required. Across the street, a sign mentions that the Greco-Hertnick Funeral Home opened in 1922.
Answer: 1932

Among the framed art work hanging in the gallery was this stunning work by a local artist: 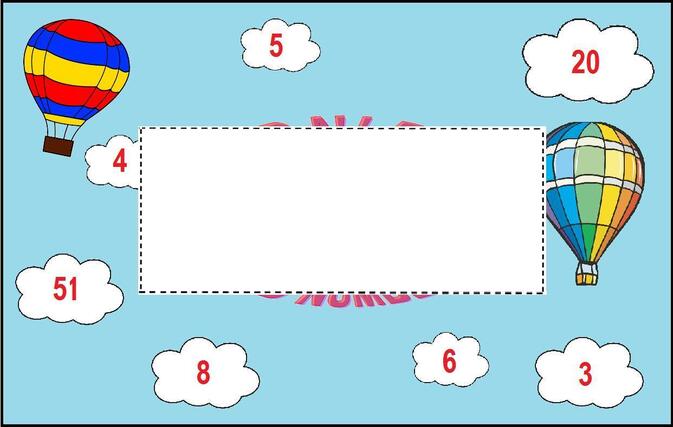 ​A note in the center tells players that a piece has been stolen, and they should be on the lookout for it. 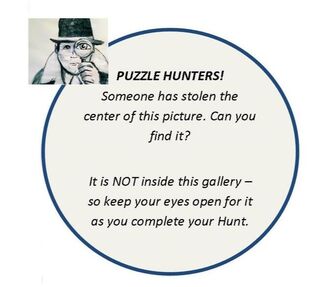 ​Part 2: Weirton Area Museum and Cultural Center
Players entering the museum were greeted with this poster: 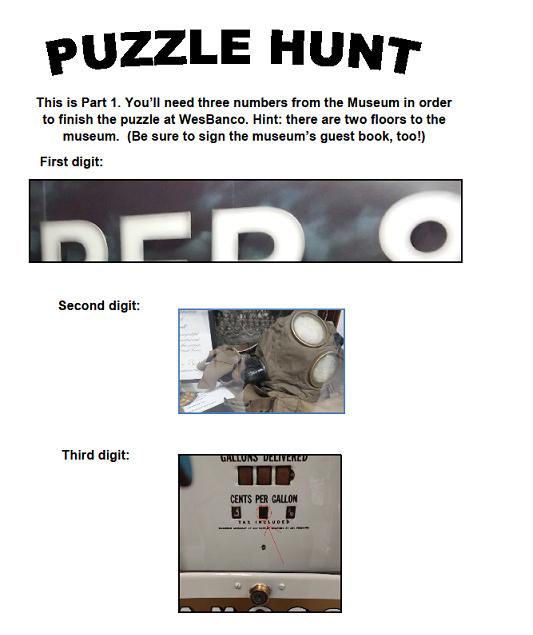 By finding the items, players discover those images represent an 8, a 3, and a 5.  Now, it’s off to WesBanco.  The first image is a close-up of a large display advertising the movie “Super 8.”  The second is a World War I gas mask, with a 3 stenciled on it. And the third image was simply a digit on display in the gasoline pump.
​
Part 3:  At WesBanco, players see a locked, guarded briefcase. This poster presents the puzzle: 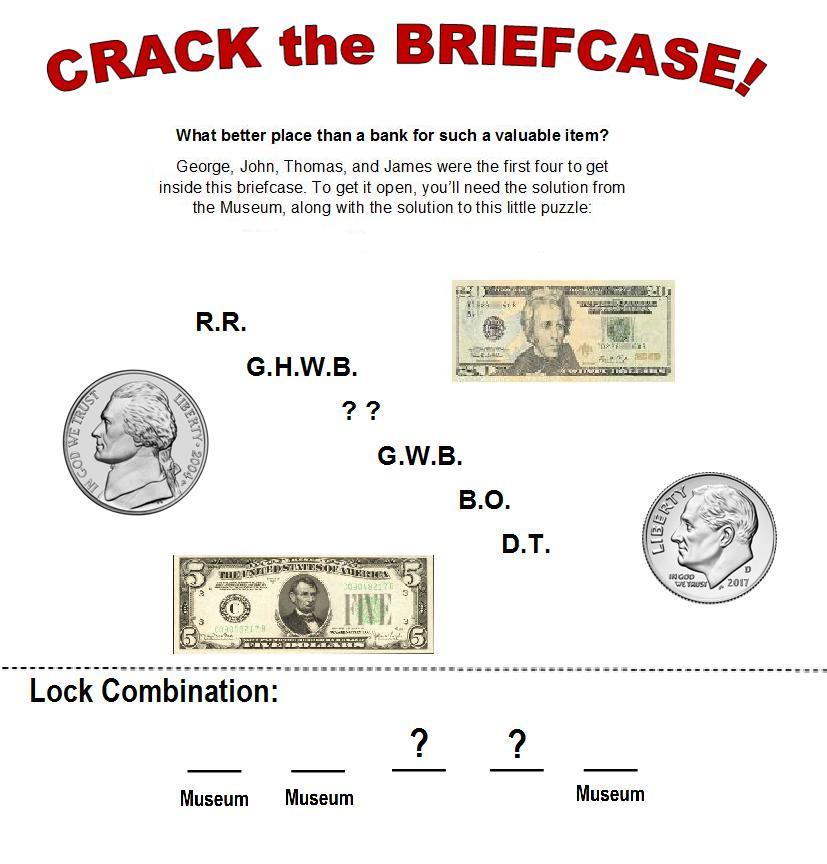 That poster includes images of presidents, and the first sentence refers to the first four U.S. presidents.  The list of initials represent the most recent six presidents. The missing initials are BC for Bill Clinton.  (Yes, W for William would work too).
So, combining the BC with the three digits from the museum, players could unlock the briefcase.
​
Inside is a card that tells them their solution is 4774. It also lists some math symbols and their values and states that players will need that information at 3:00. 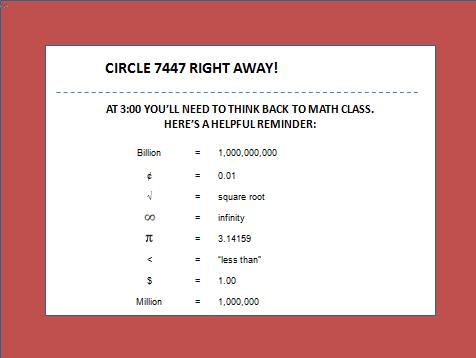 ​Also in that briefcase is the missing piece to the artwork. It looks like this, and players take a copy with them:

​They can now examine the complete picture, and see that it instructs them to “Add all the Odd Numbers.”  Doing so provides the solution.
Answer: 66


So, if players had completed all of the above, they likely have sore feet and six numbers circled on their clue sheet. As we warned them, those clues are meaningless until 3:00.  We imagine some people tried to make sense of them anyway. For example, the clue related to #6 said: “Mister Plow, that’s my name.” just a fun reference to The Simpsons, but not helpful to the puzzle.

ENDGAME:
At 3:00, all players still in the game were assembled at the Event Center stage for the final clues. There were two final clues:
1)  We told players to ignore the six solutions they’ve circled, and instead move each one down three positions. For example, the solution “6” would be replaced by #14.
This is our way of preventing anyone from jumping the gun. No one can predict what we will have them do at 3:00, so all are on the same step at that point.
Once they’d moved their six solutions, players have a new set of clues to consider:

The Second part of the final clue was simple a “pi” symbol. 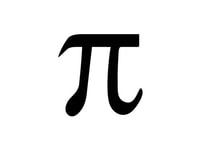 Remember that card from the WesBanco briefcase? It said you’d need it at 3:00.
It tells you the value of pi:  3.14159
We gave a follow-up clue a few minutes later since people were struggling. The follow-up clue pointed out that the third word in clue #14 was “Great.”  With a period.

(We had repeatedly mentioned that each team needed a smartphone).  Players who sent a text message that said “Casablanca” to #72345 received an automated reply. It told them to go to a certain lamp post and take a card from the person in the white hat. It also said the secret word was “Gator.”
​
At the lamp post, there were two volunteers handing out cards. One in a black hat, and one in white. (We did not tell the volunteers which one was handing out a decoy). The card from the black-hat volunteer contained a word-search puzzle that resulted in “this is a decoy.”
Those taking the correct card were almost done. The card instructs them to write their team name and the secret word on the card, and then deposit it in the correct place. The secret word was our way of ensuring that only players who successfully completed the text step would be able to win. As expected, plenty of players who didn’t figure that part out simply followed others to the lamp post.
The card’s corners were blackened with a marker, to call attention to them. The card also had a couple of arrows drawn on them.
The map has four “corner” indicators just sitting there on the image. (Look at the map again).  Those indicators were measured carefully to exactly match the dimensions of the card.  So, players simply had to place the card (with the blackened corners) right on the map where indicated. If they did so, those two arrows lined up directly with an image of a book, and an image of the numeral 8.

At the EscapeWorks booth, we had five trays lined up, and each tray had an object behind it. One of those trays had a large book titled “The Eight.”  Winners placed their card in that tray.