Read on for puzzle explanations . . . 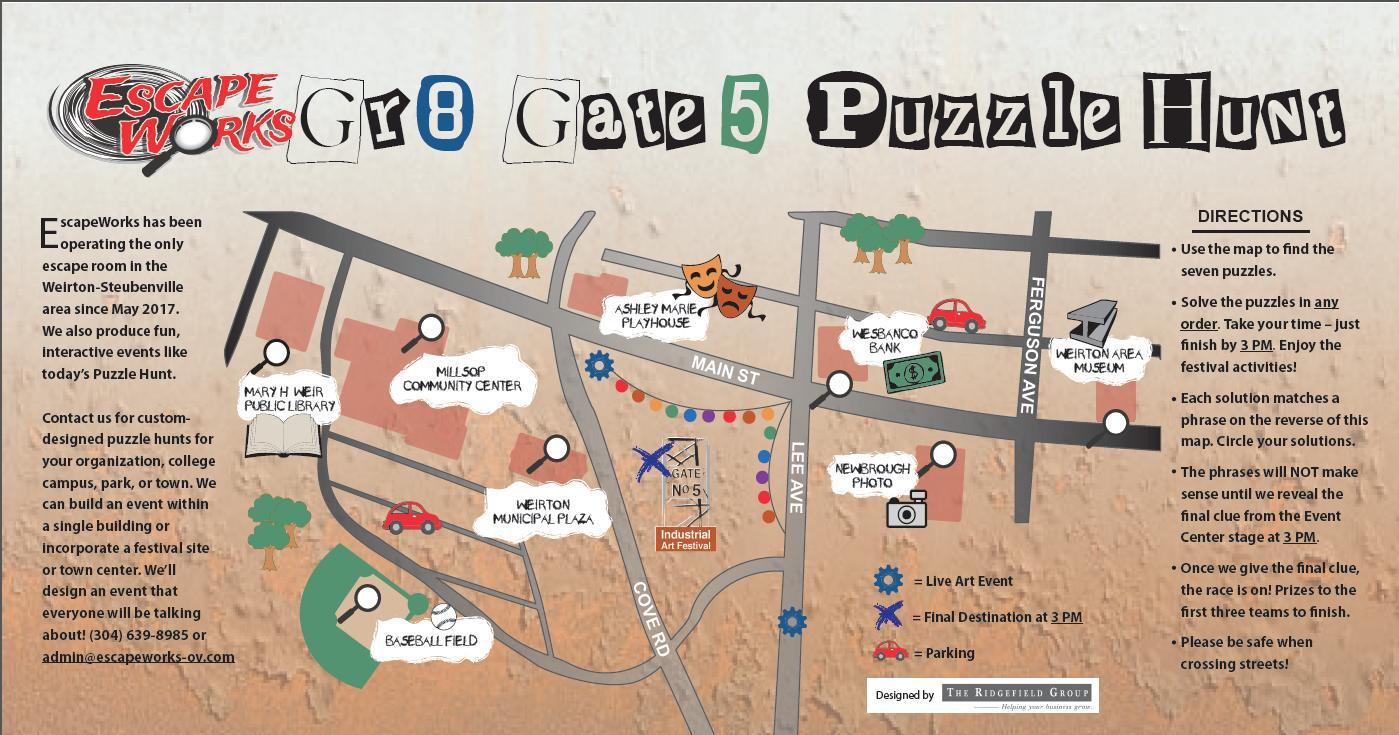 GAME FORMAT:    The main part of the game involved seven puzzles, one of which was in three parts.  The official treasure map led players to the locations, and players could visit the seven locations in any order.  Each puzzle resulted in a solution that matched a phrase on the treasure map, but these phrases would be meaningless until the final clue was provided at 3pm.  This way, players didn't have to race from site to site. We wanted players to take their time and enjoy the other festival activities.

At the Mary H Weir library's outdoor gallery, players arrived to find an exhibit of works from a mysterious visiting artist.  A sign explained that our fictional artist was born in Apollo, PA and does her best work at noon.  (Tiny hints there!)  Her exhibit included six works in all. 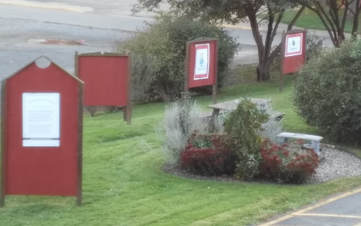 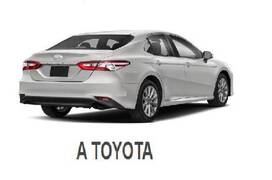 The works each included an image and a title.  The titles were the key.  They were:
Hannah
Evil Olive
Maps DNA and Spam
Race car
A Toyota
Tuna roll or a nut

​
From those six works, plus the hints in the artist's bio, players needed to determine where the artist lives.  There were six choices presented. Each choice listed a city and zip code.  The solution was the only zip code that is a pallindrome (appears the same, backward and forward).  Each item in the art show is a pallindrome, as are "noon" and "Apollo, PA."  Solution: 19891 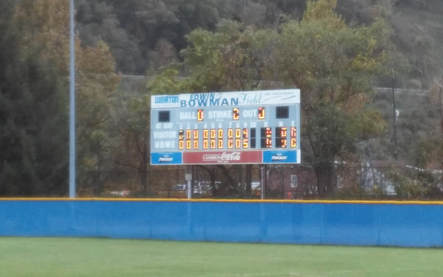 At the baseball field, players arrived to find an umpire monitoring four yard signs arranged around the infield. The signs each held a portion of the phrase "Today's game sponsored by Sherlock Jewelers."  Observant players noticed (eventually) that the treasure map included a fake ad from Sherlock Jewelers that includes the tagline “Every diamond represents a biginning.”  The scoreboard showed eight scoreless innings and one “big inning” – the 9th.   (Alternate interpretation:  there were nine runs scored in the "big inning.")  Either way, the solution here was 9. 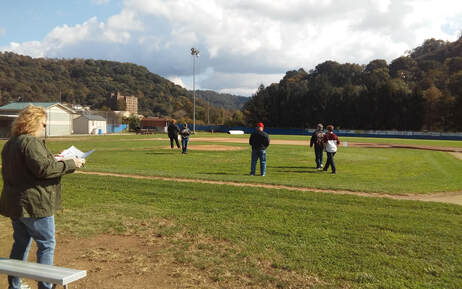 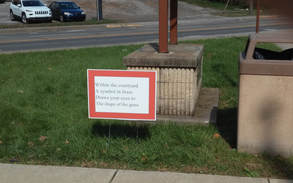 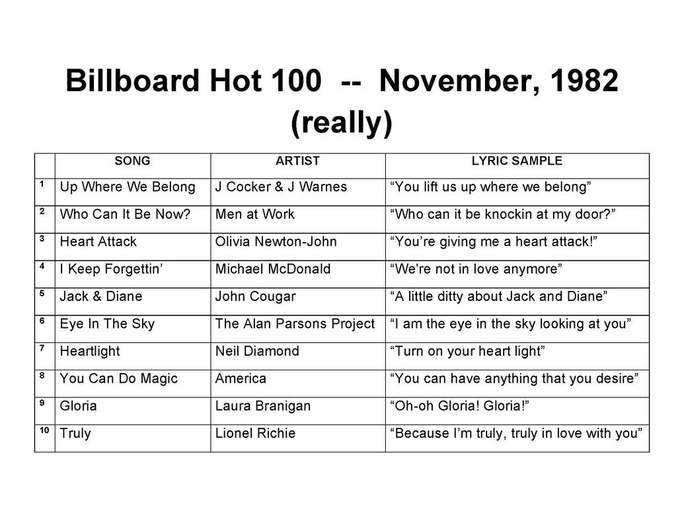 At Wesbanco, a poster displayed the top ten songs from November 1982.

​Listed were song name, artist, and a snippet of the lyrics. Nearby was a graphic of a kneeling man on a diamond shape, to indicate “kneel diamond.”

The Neil Diamond song is on the chart was "Heartlight," and the lyrics indicate “turn on your heart light.”

On the table are UV flashlights.  Again, players needed to notice the big heart on the map. Shining the UV light on the heart revealed an invisible-ink "31."   (OK, the UV ink wasn't as invisible as we expected, as some UV from the surprise sunshine produced some glow. But all things considered, we'll take the sunshine!)  Solution: 31

This puzzle was a simple scavenger hunt at the Weirton Area Museum. Players noted a poster at the entrance that directed them to add up five numbers found within museum exhibits.  Hopefully, players who had never been to the museum are now aware of what is there, and will return to explore both floors more thoroughly another time!    Solution: 257. 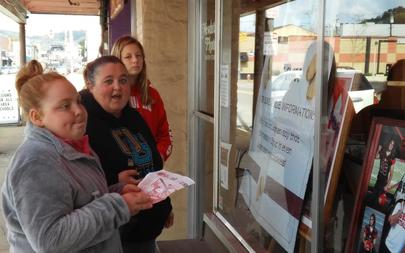 This was the multi-part puzzle.  The map led players to Newbrough Photo. In the window was a poster that read:

COME CLOSE for some inside information.  Many men and women say the cheese in China is even better than the cookies!

The poster was decorated with pictures of fortune cookies.

Nearby, a volunteer was offering free fortune cookies.  Players who took a cookie and looked at the message inside found a message with lucky numbers:  1, 5, 9, 11, 13.  Returning to the poster, if you take the first word, fifth word, etc, it spells out: "Come inside and say cheese."  Players needed to enter Newbrough Photo and say "cheese" to the clerk.  If they did so, they received a ticket that advertised a show being presented at the Ashley Marie Playhouse down the street.

At the playhouse, the Striplight Community Theatre was performing a skit that resembled a game show. The host picked a contestant from the audience and asked her questions; for each correct answer, the host would reveal a digit in the puzzle solution. 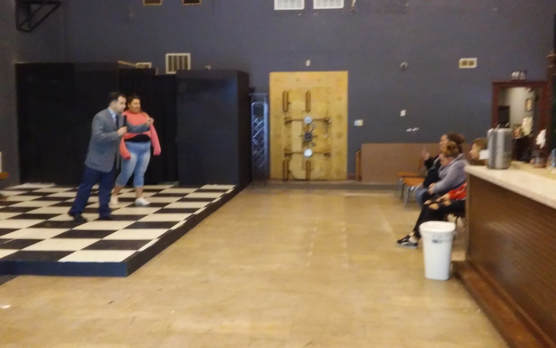 Each question revealed an answer that referred to something green:  Kermit the Frog, shamrocks, and a five-dollar bill. (The "contestant" was named Jo Greene, and had ticket number 75, like Joe Green the football player -- extra hints there).  The solution to the puzzle is a four-digit number, and the host provided the first three:  4, 6, 1.  Then time ran out.  Players see on their map that there are several possible solutions that begin with 461, but only one refers to "green."  Solution: 4614.
FINAL DASH

At 3:00, we were ready to reveal the final clue. Players who had the seven correct solutions at this point had seven items circled on their maps. Each solution was associated with a phrase.  Those phrases were not helpful.

By adjusting their list of solutions according to those numbers, players discovered the "real" phrases they needed.  For instance, instead of the triangle on the list of solutions, players simply moved forward three spaces and arrived at the phrase "Men and women 'go' there. Go there."
Adjusting the second clue on their list by moving backward one space, players now see "Black no, yellow yes, red no."

Here's what they had to do:  First, "men and women 'go there.' Go there."   Men and Women "go" at the rest room.  Players should go there.
At the rest room there are three volunteers, each holding a colored umbrella, and each umbrella featured a Greek symbol. Next to them was a large photograph of the Weirton Event Center, with several locations marked with Greek letters.  (This photo was also displayed at the EscapeWorks tent where players got their maps). 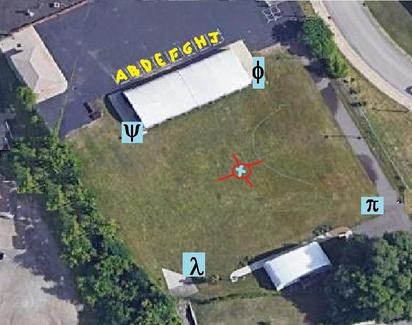 The second clue said  "Black no, yellow yes, red no."  The yellow umbrella displayed the symbol that indicated where players should go next.

The next clue said "if you're speedy a cop might give you a ticket."  At the secret location, a Weirton Police Department officer, in uniform, stood ready to hand out tickets to players who got that far.  The ticket had a simple equation to figure out, that resulted in 75.

Next clue said "EscapeWorks is the place to be!" (which is true, by the way).  So players needed to return to the EscapeWorks tent, with their ticket showing the correct 75 solution.

The last two clues said "In the O'Lantern family, Jack gets all the attention, but . . . ."   and "Freddy is the real winner. You have to hand it to him."

On the table at the EscapeWorks tent were four Jack O'Lanterns, each with a name tag.  Players dropping their ticket into the one labeled "Freddy" were the winners!

First prize was a 55" 4K flat-screen!  Second prize was a plastic tote filled with family games like Pictionary and Heads Up.  Third prize was a free pass for up to six players at EscapeWorks ($150 value)